I am sorry to intrude on your Saturday morning with another letter.  The events of the last ten days cry out for a response, and it also gives me the opportunity to share two documents from the Catholic Church in Canada (attached).

I am referring to the numbing news about the discovery of the bodies of 215 children at the site of the Kamloops Indian Residential School on the Tk’emlúps te Secwépemc First Nation in British Columbia. The news is distressing and some of you have justifiably shared your outrage and disappointment that, in this case, it happened under the care and supervision of the Catholic Church.

Midweek, a former member of the Canadian Senate, Murray Sinclair, chair of the Truth and Reconciliation Committee (TRC)from 2009 to 2015, and principal author of the committee’s report, said that this is only the beginning of such discoveries.  He was blunt in his observation that this “new” revelation is not new news. It is another reminder he said that the years and years of hearings across Canada from survivors of the residential school system, who day after day told their stories, have still not been heard.  The burial of children in unmarked graves is well documented in the TRC report because it came up repeatedly during the years of listening.  The report also documents the death of more than 6,000 children in the residential school system which was maintained in Canada from the 1830’s until 1996.  One of the recommendations from the report still to be responded to according to Mr. Sinclair, is the return of the bodies of these children to the families and communities from which they were taken.

On Tuesday evening, CBC radio program Q host Tom Power interviewed Michele Good. She was the winner of the Governor General’s Award for Fiction for her first novel Five Little Indians last weekend. Michele is a member of the Red Pheasant Cree Nation in Saskatchewan.  Her mother, grandmother and cousins are among the generations of indigenous children who were forcibly taken from their families.  In the interview, among many stories about the schools, the account of the impact on her mother is tough to listen to as is the impact of the schools that linger in Michele’s own life.  She remembered her mother talking about a child who was at the school one day, and the next day they would be gone.  “No one would ever say anything about what had happened.”  One of her very powerful statements in the interview comes in her comment on a question that was put to politicians and others over the weekend who referred to the schools and the discovery of the bodies as “historical, something from the past”.  “It’s not” she said. “The impacts continue today and they will continue for many, many years to come.” She went on to describe a question that she keeps hearing again and again: “Why can’t you just get over it? It’s history.”  Her constant response to such an insensitive comment is that “Nobody on earth would make a similar comment about the Holocaust or 9-11……It means that they do not understand that survivors left the schools with this tremendous psychological injury. They left with PTSD, with anger issues, with addiction issues arising from trauma, an inability to have meaningful functional relationships.” She added: “In my view, even if a child was not sexually or physically abused, they were traumatized before they even got to the school. The moment that the RCMP and the church showed up and took them away from their parents, the lesson that child learned in that moment is that nobody can take care of them, nobody can protect them from harm.”  Her parting advice was: “We need to keep telling these stories, not only so that residential school survivors can feel that they have been heard, but also, in response to that terrible question that we keep hearing over and over again: why can’t we just get over it.”  You can hear the full interview with Michele Power here (it begins at 3.08): https://www.radio-canada-online.com/podcasts/q-the-podcast-from-cbc-radio

Apologies are important.  They need to come fast and with sincerity of heart.  But apologies without a resolve to grow in knowledge and do the hard work of understanding our history and bring into the light the whispered secrets of the past, become empty words. How many of us (I include myself in this) have made any effort to read or understand the report and the recommendations from the Truth and Reconciliation Commission?  What have we read beyond the headlines about these schools?  Personally, I struggle to understand why the Church would involve itself in such a dark and cruel government policy especially after it became obvious early in its implementation, that it was flawed and damaging.

In the two letters attached, the Canadian Bishops and the superior of the Order of the Oblate’s of Mary Immaculate respond to the discovery at the Kamloops Residential School.  For many over the last week, it is not enough.  A growing number of people, Catholic and non-Catholic, are demanding that Pope Francis must respond.  I believe that he will, and it will be sincere.  But in the meantime, the hard question is: what are we going to do?  Pouring so much energy into being mad at anyone involved in this shameful history for a week or two is not helpful, especially when we know that there is more to come.  Maybe the wise counsel of the leaders in the Indigenous community inviting us to listen, to reason, and to understand, is the path forward for all Canadians.  The Truth and Reconciliation Commission listened for seven years to survivors and to parents, grandparents, aunts, uncles and cousins, about what happened when they and their children were taken from their families and placed in schools and communities’ they did not want to be in.  I’m going to start by reading Michele Good’s new novel. 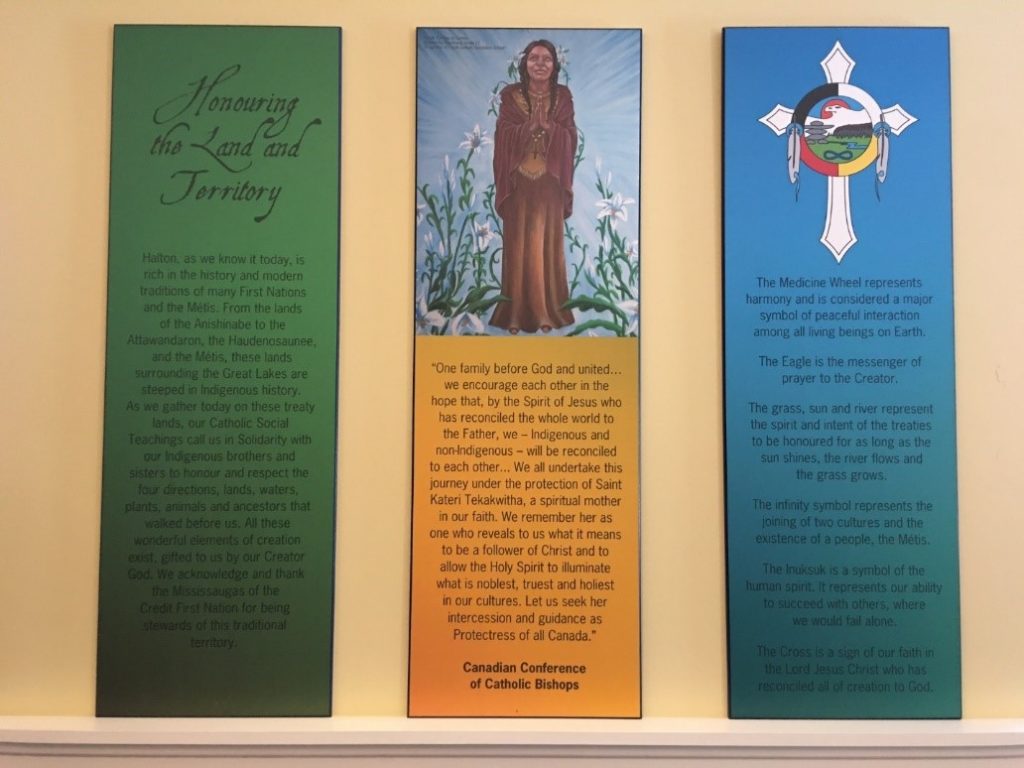 Here at St. Andrew’s, all of us could stop for a few moments when we return back to church and pause for a few moments in front of the three plaques at the side entrance that honor the work of the Truth and Reconciliation Commission report. Read them and pray the prayer composed especially for the implementation of the report’s recommendations (below).   That is a start.  The involvement of the church in this awful chapter of our history is shocking and painful.  At the same time, it is a challenge to all of us to confront its legacy.

We encourage each other in the hope that,

by the Spirit of Jesus who has reconciled the whole world to the Father, we – Indigenous and non-Indigenous – will be reconciled to each other…

We all undertake this journey under the protection

of Saint Kateri Tekakwitha, a spiritual mother in our faith.

We remember her as one who reveals to us

what it means to be a follower of Christ

and to allow the Holy Spirit to illuminate what is noblest,

truest and holiest in our culture.

Let us seek her intercession and guidance.

as Protectress of all Canada.

A final note:  we received word in the late afternoon yesterday that we may be allowed to open the church at 15% capacity three weeks earlier than expected on June 14th with the same protocols that we had for Easter still in place.  This is terrific news and we will have more information for you next week.    We will also be allowed to have a higher percentage in phase two or three.  Two long-time parishioners passed away this week:  Shirley Barr and Pat Murphy.  They contributed a great deal to the church and the community.  Pray also for Vince Spagnalo.  May they be drawn into the loving and comforting heart of Jesus.